Welcome to Amsterdam!
Home of cycling , Heineken, stroopwaffles, the cutest most photogenic houses and what feels like endless canals and bridges. This place really is the Venice of the Netherlands! Amsterdam is home to a whole lot of history. It was first founded in the thirteenth century as a fishing village but quickly became much much more than that. I was lucky enough to spend 4 full days in the Netherlands recently, spending 2 of them in Amsterdam and 2 in surrounding cities.
So now for the good stuff, here are my top 5 things to do if you’re visiting Amsterdam for the first time! #1 Rent a Bike
The best way to explore this city is by foot or by bike. If you plan on making a lot of stops I suggest walking the first day, and maybe renting a bike on day 2 once you have your bearings. I will warn you, biking in Amsterdam is no joke. My first thought as I watched hundreds of local cyclists fly by me was “Are we competing in le Tour de France?!”
So to say it was a little intimidating at first may be an understatement. Not only do you have to be careful of vehicle traffic in the city, but aware of cyclists and Vespa riders at all times because they really don’t stop for anyone. The city quite litterally is built for biking, which I think is amazing. Between all the roadways and sidewalks are red pathways marked as bike trails. On top of the normal traffic lights and pedestrian crossings you normally would see in other cities, Amsterdam has bicycle traffic lights and crossways specifically for cyclists.
So if you’re feeling brave enough to hop on a bike it really is the best way to see a lot of the city quickly. You will find bike rental stores all throughout Amsterdam, most of them being 24 hour rentals. Same goes for vespas if you’d rather go that route. If you aren’t feeling up to biking in the craziness of Amsterdam, you can go to a town only about 20 minutes away called Haarlem that is definitely worth visiting and much less hectic. Stay tuned for a post on Haarlem.
Some areas to bike through if it’s your first time in Amsterdam:

#2 Eat a stroopwafel and some poffertjes
Who would’ve known Amsterdam is so obsessed with breakfast foods? Everywhere you turn in Amsterdam you won’t be far from a pancake or waffle place. I also noticed a lot of restaurants had omelets on their all day menus, or added eggs to many meals that usually would not (poached egg on a caeser salad?) Considering breakfast is my favorite meal of the day I was all for it!
While many places sell regular pancakes in the city, something unique Amsterdam has on the United States are their poffertjes: mini fluffy pancakes covered in butter and powdered sugar, amongst other toppings. Basically a heart attack on a plate but so yummy! I got mine with strawberries and whipped cream from the place next door to blue boat tours. Okay. I’m going to be honest and say it. There are some foods and drinks I’ve ordered before not because I thought they’d taste amazing but because they looked cute. You were all thinking it anyways weren’t you? I’m always pretty surprised when the beautiful presentations and “trendy” food places actually end up having the best tasting menu. While I’m sure there are lots of places to get a good stroopwaffle in Amsterdam, I went straight to Van Wonderen because a few of my favorite bloggers had gone there recently.
O.M.G.
I really didn’t think I’d like it so much, but turns out I am in love with these caramel and chocolate waffle concoctions. If you’re wondering what a stroopwaffle is, it’s a two thin crispy waffle pieces glued together by a layer of hot caramel in between. Van Wondersen takes it up a notch and adds a slab of melted chocolate and your topping of choice. THESE.THINGS.ARE.AMAZING.
Can you tell I’m obsessed? If anyone knows of anywhere I can get this deliciousness in the states from please comment ASAP. Try not to drool looking at these photos: #3Take a boat tour through the canals
Seeing Amsterdam from the canals is something everyone should experience at least once. You get to see the city from a different viewpoint and most tours have a guided audio guide that gives you some history of the city, buildings and canals you float down. You won’t have trouble finding a boat company to take you on a tour of the canal, but I would definitely suggest doing your research beforehand.
We took blue boat and it was so cute. I enjoyed the canal cruise, however our tour boat didn’t have a live guide, instead it was an audio recording we listened to and it wasn’t quite as informative as I would’ve hoped. The next day we ended up near the Anne Frank house and came across a canal cruise tour that offered free unlimited beverages including alcohol and for less cost than the tour we took. So that could be something to look into.
You can also buy packages that include the canal cruise, along with other museums and attractions including the Heineken experience. If you know you’ll be visiting more than one attraction it’s definitely worth booking ahead of time or at least booking it all at once to get the discount. #4 Visit Bloemenmarkt: The floating flower market
The flower market of Amsterdam is one of those things that you just have to stop by and see once while there. If you love flowers, you’ll be in heaven. Here to you’ll find beautiful bouquets, tulip bulbs, seeds, souvenirs etc. there are definitely cheaper places to buy flowers and tulip bulbs such as street markets and flower stores but at the heart of Amsterdam it’s hard to miss this tourist attraction.
If you visit during tulip season, I highly highly recommend visiting one of the tulip fields. They’re only blooming March to May, and unfortunately I got to Amsterdam literally 1 day too late to visit the flower fields I wanted to see, but from what I’ve heard its amazing. A lot of the bloggers I follow seem to reach out to private tulip farms to have photo shoots at, but there’s several public tulip fields as well. Keukenhof is the largest and most famous one I’ve heard of to date.
I ended up buying some tulips at the Haarlem farmers market on a Saturday afternoon the day before leaving back home. I was determined to bring them back to Florida and for the price I really couldn’t help myself from at least trying it. We paid 5 euros for 40 tulips!! I bought some that hadn’t fully bloomed yet in the hopes they’d make it back to Florida alive, and with some luck they did! I now have a few beautiful vases filled with tulips back home. Cut flowers are much easier to bring back than rooted plants. To bring my bouquet back to the states all I had to do was claim it on my customs and immigration paperwork, and have it inspected for bugs and I was on my way! Im a flight attendant and had no idea we could bring plans or flowers at all, so this was a nice surprise for me. Next time ill be bringing much more home! #5 Go Shopping
The 9 streets are 9 picturesque streets filled with clothings stores, boutiques, cafes, restaurants and souvenirs shops to choose from. Shopping in Europe is honestly the best if you have the time. It’s never a priority on my list, because I want to sight see more than anything, but if I happen to find the time I love to shop at some of my favorite stores: Primark, Berksha, Zara, Mango, and Pull & Bear to name a few.
Other than clothing, some ideas of things to buy to bring home include flowers, cheese, and delftware (those beautiful blue and white ceramic pottery pieces you see in shops). Well thats a wrap, those are my top 5 things to do while in Amsterdam! Stay tuned for two separate posts on my day trips to both Haarlem and Zaanse Schans! 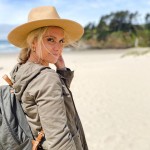